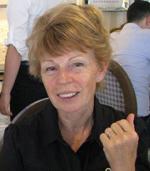 Katia Ruel is actually retired from her position as Research Director at CNRS (Centre National de la Recherche Scientifique) where she pursued her scientific career at the Centre de Recherches sur les Macromolécules Végétales (CERMAV) in Grenoble (France). She received her education at the University of Orsay (Paris-XI) where she graduated in Biology. After a short period of teaching, she moved to Grenoble and acquired a degree in Plant Biochemistry before obtaining her Doctorat-ès-Sciences on the development of Plant Cell Walls. She joined CERMAV where she spent all of her career on the developmental organization and ultrastructural composition of lignocellulosic cell walls. In particular, she had a pioneering role in developing new techniques for labeling polysaccharides and lignin in Transmission Electron Microscopy, and was particularly recognized for her immunological probes applied for deciphering polysaccharides and lignin molecular epitopes distribution in the growing plant cell walls. She supervised several Ph.D. theses and formed many researchers in plant cell wall topochemical analysis and macromolecular organization. She published around a hundred articles in international journals, and reviews in books. She participated in many international meetings and was frequently invited as a speaker. She has been an active member of management committees of European Research actions and acted as expert evaluator for European Union projects, and for several other national projects. She is a Fellow of the International Academy of Wood Science for which she served as member and chair of the Board of Direction.

Jean-Paul Joseleau received his education in chemistry at the University of Grenoble (1959-1962), and obtained a Ph.D. degree in organic Chemistry in 1965 at the University of Grenoble on lignin biosynthesis under the supervision of Professor F. Barnoud and Professor T. Higuchi (Japan). He was introduced to glycoscience research by Professor G.G.S. Dutton (UBC, Canada) with whom he completed a Ph.D. in Bio-organic Chemistry on the structural elucidation of hemicelluloses (1975, Vancouver, Canada), after obtaining a Doctorat ès-sciences d’Etat in Grenoble (1974) in Biochemistry. He was Professor of Biochemistry at the University of Grenoble and director of a research group on Plant Cell Walls at the Centre deRecherches sur les Macromolécules Végétales (CERMAV, UPR-CNRS 5301). He was nominated Professor Emeritus in 2004. He developed researches on the primary structure of bacterial antigen K polysaccharides, and carried out a long time study in plant cell wall chemistry and biochemistry, focusing on the modifications induced during cell development and maturation. The occurrence of polysaccharides and lignins during plant cell walls elaboration was studied on the chemical,biochemical, and ultrastructural levels. He has been President of the Reseau Français desParois Végétales and was elected in 1993a Fellow of the International Academy of WoodSciences (IAWS).

ACKNOWLEDGEMENTS The authors wish to thank Dr. Serge Perez for his helpful contribution in the 3D imaging representation of lignin computerized model, and inspiring discussion.